Born to a wealthy family in Northumberland, Wilfrid was a second generation Christian. Although the native Britons were mainly Christians, when Roman influence waned in the 5th Century, waves of Anglo-Saxons had invaded and brought in their pagan gods. This was also a time of struggle for dominance within the Church between the Irish/Scottish Celtic Christianity and the Roman tradition.

Wilfrid had an interest in the things of God from a young age and went to study in Lindisfarne, a centre of Celtic Christianity, under St Aidan.

Intent on continuing his education Wilfrid set out to travel to Rome, but was beguiled by the lifestyle of the Archbishop of Lyon and stayed there for quite a while living the high-life.  Eventually he arrived in Rome about 654, when he was about 20. He stayed for a short while, but returned to Lyon where he continued his education under the patronage of the Archbishop.  However, the Archbishop's wealth and ways caused jealousy among the secular powers and he was put to death along with many of his entourage.  Wilfrid's status as a foreign nobleman, who was known to the local king, saved him from an early death.

At the age of about 27 we find Wilfrid setting up a magnificent new abbey at Ripon in Yorkshire with fine stonework using skilled men he had brought from France.

The division between the Celtic and the Roman Church threatened to break into violence so in 664 the newly ordained Wilfrid took his seat as an 'expert' at the Council of Whitby and championed the cause of Rome. Rome won.

A year later, Wilfrid was appointed by the Pope as Bishop of York.  He went to France for a proper episcopal consecration, as he didn't trust that ordination in the Celtic tradition would be valid. However, he dallied so long in France that another man (Saint Chad) was put in as bishop of York.  Wilfrid returned to his abbey in Ripon fuming.

Theodore, a learned Greek who had just been appointed as Archbishop of Canterbury, came to Wilfrid's aid three years later.  He said that Chad had been irregularly ordained.  Chad went away meekly to be an abbot and Wilfrid took up York.

Immediately he set about restoring the Cathedral and other churches in the diocese. He provided funds for their upkeep and soon had amassed a great fortune for the Church.  Incidentally a link with the Lancashire side of the Pennines was set up when he acquired much land in the Ribble Valley.

Wilfrid loved a good show and though he lived modestly without personal excess he presided over many a magnificent celebrations and some feasts went on for three days solid.

His fortune and growing power earned the jealously and fear of the secular powers. Egfrid, the King of Northumberland, had taken a dislike to Wilfrid when the latter had supported the wishes of Egfrid's wife to remain consecrated to God and withhold conjugal rights.  (She was a widow when she married Egfrid and was many years older than him.)

The chance for revenge came in 678.  Egfrid called up the Archbishop of Canterbury when Wilfrid was away doing a spot of missionary work. The King suggested that York was too large a diocese and for its better administration it should be split up. The Archbishop agreed as the proposal had much to commend it pastorally. But upon his return Wilfrid, finding his diocese now shrunk, was livid and went off to Rome to complain.

A combination of relatively slow transport, keeping out of the way of enemies and the enjoyment of continental way of life meant that Wilfrid again took some time. It was two years before Wilfrid was back in England, vindicated by Rome. He was accepted back into his somewhat smaller diocese, but only for a while.  Egfrid soon banished him, so Wilfrid, not being a man to waste his time in lamenting his misfortune, went off to do missionary work with the Saxons.

A year after the death of Egfrid in 685, Wilfrid returned to take up York. He remained in power for five years, after which he was banished by the new king who felt Wilfrid was getting too uppity.

In 703 Wilfrid, now aged 69, again travelled to Rome to complain. Again he was vindicated and three years later took up the Archbishopric of York for the last three years of his life. 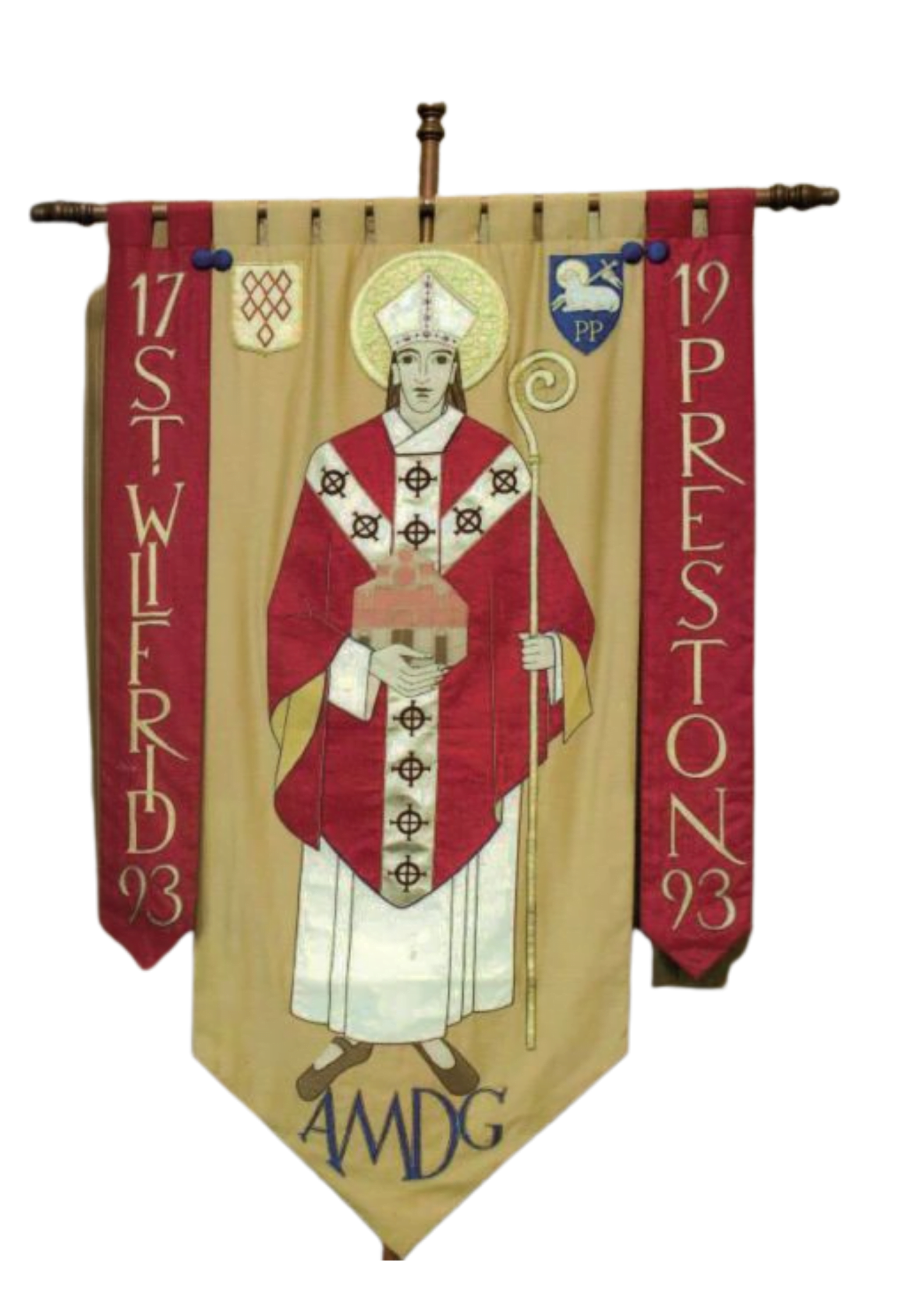 The St Wilfrid's Banner, commissioned in 1993 on our bi-centenary